Following is the description of N489C as purchased in Dec 2017 (I am the fourth owner, but it is time for a mission change to a float plane.)

John Lyon was the third owner of this magnificent airplane, the 4th Meyers 200 and the first 200A model. John owned it for forty years. This airplane was built in 1959, and was the first Meyers 200A, equipped with an IO-470D engine. The second owner had a forced landing after improper maintenance, and returned the airplane to its birthplace at Tecumseh, Michigan. There Beaumont S. “Pard” Diver, formerly factory manager of Meyers Aircraft, and Ray Betzoldt,Meyers test pilot and co-designer, made all repairs, modified the airframe to 200B standards, and installed an IO- 520A in place of the IO-470D. In 1993, FAA issued a new airworthiness certificate recognizing N489C as a 200B.

In 1996 the complete airframe was overhauled. The airframe work was extensive. Everything which could be removed was removed. Small areas of light corrosion were removed, treated and primed. No other corrosion was found.

The following components were removed and replaced with new (1996):

Generator replaced with an alternator.

AVIONICS (Note changes & additions installed in June 2018 – see “Changes / Additions” below) In 1996 original avionics were removed and replaced with the following:

The sexy red beast.  If you Google Meyers 200, you will see years worth of photos of this iconic aricraft. 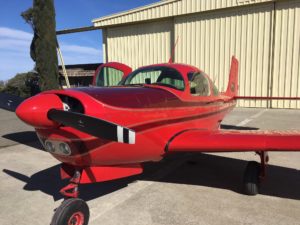 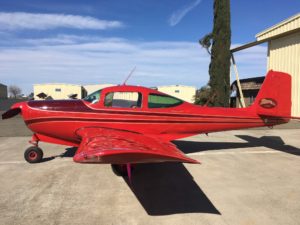