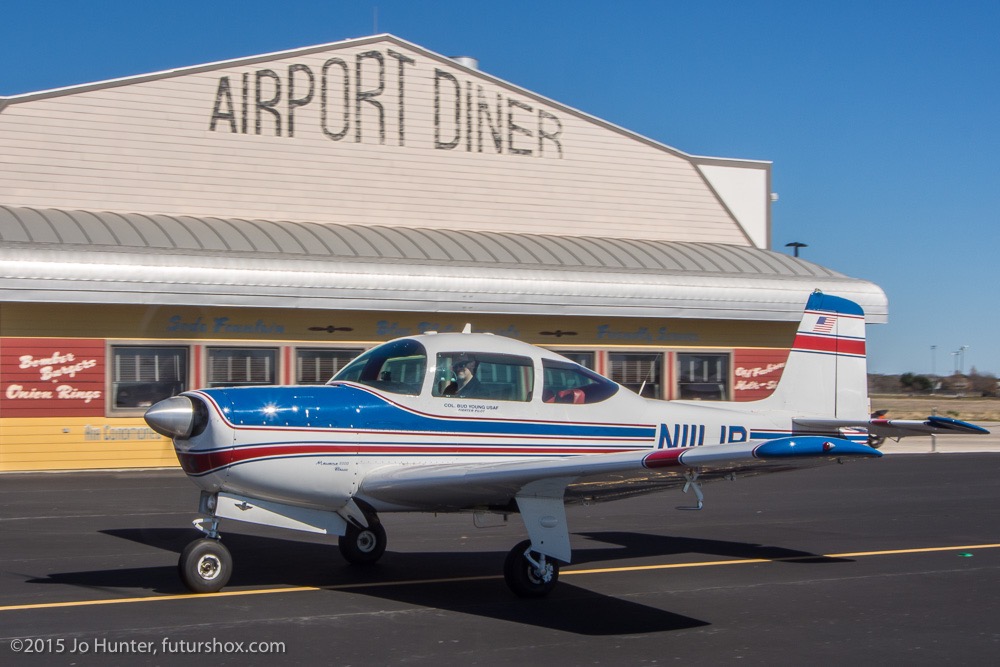 The following article was written by one of our current members and goes to show the passion and dedication that goes into the DNA makeup of a Meyers Owner.  Enjoy!

I’ve had the opportunity to contribute to the development of multibillion dollar GPUs in my various engineering and management roles at NVIDIA. Helping to bring these complex chips to market is incredibly rewarding. And seeing what scientists do with them is awe inspiring.

Yet, when I had the chance to work on a far smaller project – restoring a historic aircraft with which I had a personal history – I just couldn’t pass it up.

The Meyers/Aero Commander 200 is the kind of plane that delights seasoned aviation buffs. Only about 120 of the single-engine, prop-driven airplanes were built. Originally designed by pioneering aviator Al Meyers in the ‘60s, it was renowned for its clean lines and ability to match up against the fastest four-seat, single-engine planes of its day.

While it’s an amazing plane by any measure, this specific plane is special to me because it had been my father’s for more than 30 years.

On our yearly trips flying from New Mexico to Washington state to visit my grandparents, I would serve as both navigator and relief pilot. Long before I had my pilot’s license, I discovered the joy of flight sitting atop a phone book so I could see over the instrument panel. The last time I flew with my dad, nearly three decades ago, was in the Meyers.

Built for speed, the plane was once owned by Indy 500-winning race car driver Johnny Rutherford III — the plane’s number, N111JR, reflects his ownership. My father, a former Air Force pilot who’d flown F-105 fighter jets during the Vietnam War, purchased it in the mid-1970s and tuned it for even more performance. He was winning air races in the plane until medical issues forced him to mothball it in 1997.

After my father passed away in 2010, I traveled back to New Mexico to help my sister organize his estate. When visiting the airport to sort out what had become of the plane, I had no idea what to expect.

Opening the hangar, we found the plane covered by a thick layer of dust, surrounded by half a lifetime’s worth of my father’s projects. The plane looked pretty good, though closer inspection revealed the effect of years spent languishing in the darkness.

Some of the restoration challenges were obvious: rubber in the hydraulic system hoses and vacuum-based autopilot was dried and cracked, the vinyl interior was brittle and the radios were conspicuously missing. Even the jacks the plane was resting on had failed, damaging a component of the landing gear.

Other problems were hidden, although not entirely unexpected. Airplanes need to be flown regularly to keep the engine well lubricated. With the Meyers sitting for more than a decade, rust had formed inside the engine, which would need to be completely rebuilt or replaced.

Planes are trickier than tinkering with cars, where there are few regulations to consider. Strict U.S. Federal Aviation Administration regulations apply to almost all changes. Guidelines have to be followed and documentation recorded before a mothballed plane is allowed to fly again.

Early on, I’d asked my mechanics if it would be possible to observe some of the restoration. “If you’re here, we’ll put a wrench in one hand and a rag in the other,” they replied. Admittedly, the “wrench” was sometimes a shop broom, but they understood my enthusiasm and let me participate in some of the work while under their supervision.

The first stage involved removing all inspection plates and panels, the interior and the engine. Because the plane is rare, and documentation sparse, the work was akin to archaeology. Every component was photographed before being removed to streamline reassembly. All cables, wires and hoses were tagged with descriptive labels. It was an amazing education that allowed me to deepen my understanding of every inch of the plane.

One major decision was whether to rebuild or replace the engine. Flying with a brand new engine was attractive, though more expensive. Rebuilding would save some money and reuse some components that were now “seasoned” by previous heat cycling in the engine. In the end, I decided for the rebuild, and only later discovered that several major components could not be overhauled and would require replacement, overwhelming the price of a new engine.

This costly decision points to a paradox of restoration: sometimes there is no way to discern the most efficient way forward before actually making the decision. Any regret I have is tempered by knowing that rebuilding the engine was truer to the spirit of the project.

Despite setbacks and surprises, the work made great progress over the months. The engine was reinstalled, the entire hydraulic system, autopilot and control cables were replaced, and the landing gear was completely overhauled.

Whenever I’ve been asked when the plane would fly again, my answer has always been the same: “When it’s ready.” Each week brought the plane closer to the flight testing that would sign it off for the trip to California. But some weeks I wondered if it’s easier to schedule chip programs than an aircraft restoration.

Someone once asked me if I could have simply bought another plane that had already been restored for less time, effort and money than it is taking to restore the Meyers. The answer – absolutely, positively, without a doubt – is yes.

However, my goal wasn’t just to own a plane. My goal was to restore my father’s Meyers and a piece of aviation history. It’s about having the passion and commitment to bring a classic airplane, and a piece of my own personal history, back to life.

On April 11, 2013, over the high desert of New Mexico, the Meyers again took to the skies.