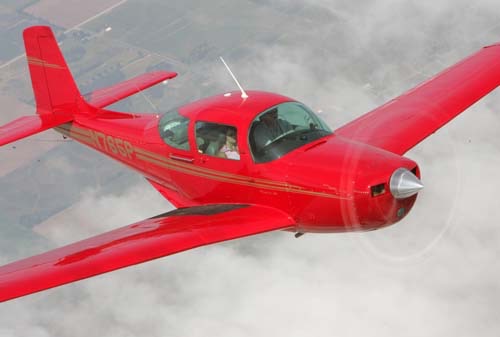 GlobalParts Group, Inc. of Augusta, KS, distributors and producers of quality parts for business and general aviation, announced today that they have acquired the Type Certificate, intellectual property, tooling, and assets of the Meyers Aircraft Model 200 type design and have formed a subsidiary, Interceptor Aviation, to facilitate the servicing and support of the iconic high performance single engine model which was originally certified in the 1960s. The acquisition also includes the TC for and only existing example of the pressurized single engine turboprop Interceptor I-400, which was derived from the Model 200.

“We are excited and energized by the prospect of working with and supporting the extremely loyal owners and operators of the Meyers 200,” said GlobalParts Group Chief Executive Officer Troy Palmer. “We’re looking forward to establishing a strong and ongoing relationship with them. This acquisition is part of an ongoing development plan for the GlobalParts Group, Inc. which now includes our GlobalParts.aero parts distribution division, GlobalParts Aero Manufacturing, the fabrication segment we added in 2014, GlobalParts Aero Services, our FAA certified Part 145 repair facility, and this newly-formed entity, Interceptor Aviation, which will be responsible for oversight and support of our airframe customers.”

Mr. Palmer indicated that GlobalParts plans to attend the Meyers Aircraft Owners Association’s annual Fly-in in Fredericksburg, TX, May 27-May 31. “It will provide us with an excellent opportunity to introduce ourselves to the Meyers aircraft family and welcome them to ours. At the same time, we hope we’ll be able to find out more about what we can do to make their ownership experience not just satisfactory, but exceptional,” he added. There are approximately 100 Meyers 200 aircraft currently in service.

“The decision to acquire the TCs for the Meyers 200 models and the I-400 and the associated tooling and assets was a fairly straightforward one,” noted Malissa Nesmith, GlobalParts’ Chief Operating Officer. “We discovered that they were available in March and immediately arranged to review and assess the assets. Providing parts and support for general aviation aircraft is what we do and we recognized that the Meyers 200 series and the I-400 are aircraft with a strong following, a great reputation for durability and performance. With our experience, FAA certified repair station and our in-house, build-to-print manufacturing capabilities we recognized that we can provide stability for the Meyers fleet, so we proceeded with the transaction and completed it on March 31. We subsequently moved the tooling and most of the assets to our facilities in Kansas and have created a subsidiary focused on supporting the airplanes and their owners–Interceptor Aviation.

“Owning the type certificates for the Model 200 and the I-400, which was certified in 1971 but never entered production, allows us to explore options for improvements to Al Meyers’ original designs which set standards for performance and reliability when they were first introduced. The Meyers 200, in its four variations (Models A, B, C and D) is an amazing design and, along with the turboprop, pressurized Interceptor I-400, it was an aircraft ahead of its time. Both the piston and the turbine powered versions are extraordinary because they were introduced a half century ago but their performance, economy and versatility make them competitive in today’s market, as well. We are just in the early stages of assessing their potential, but we’re extremely pleased to be associated with these iconic airplanes,” Ms. Nesmith concluded.

Al Meyers, who graduated from Cornell University with a degree in mechanical engineering, apprenticed with pioneer aircraft builders such as Chance Vought, Glenn Martin and Edward Stinson. His first airplane was the OTW a bi-plane designed for competition, then the 125-145, and finally the 200 series. The Meyers 200, Meyers 200A, Meyers 200B, Meyers 200C and Meyers 200D have an excellent maintenance and safety record. An October 1999 search of the FAA records revealed that there were at least 39 produced by the Meyers Aircraft Company in Tecumseh, Michigan: 1 200 built in 1953, 8 200A’s built in 1959-1960, 13 200B’s built in 1961-1963, 7 200C’s built in 1963 and 4 200D’s built in 1964-1965. North American Rockwell’s Aero Commander Division purchased the design from Mr. Meyers in 1965 and, in 1966-1967, produced another 83 aircraft (SN 301-383) known as the Aero Commander 200D from their Albany, Georgia location. The Model 200 established several long standing speed records and was widely regarded as one of the strongest airframes in general aviation.

The Interceptor 400 was the first certified single-engine propjet in the United States. Certified in 1971, it is powered by a Garrett (now Honeywell) TPE-331 840 tshp (thermo shaft horsepower) engine, and requires only 400 feet for take-off. It is a pressurized, air-conditioned, four-place aluminum airplane which can cruise at 300 knots at 24,000 feet. Only two were built as type certificated aircraft. The sole remaining model was included in the GlobalParts acquisition.