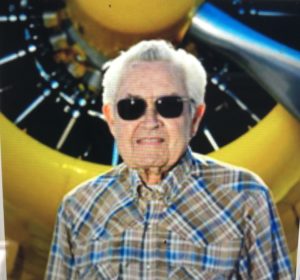 It is with great sorrow that I report from California that Mr. Al Grouleff has passed away.  Al was a long time Meyers 200 owner.

A bit of background information for the Meyers members who never had the pleasure of meeting Mr. Grouleff.  At age 19, Al was flying in the left seat of a Curtiss C-46 “over the hump” in the China-Burma theatre of operations during WWII.  In 1946, after his military service, Al went to work as an Ag. pilot flying Stearman crop dusters in the Imperial Valley of California.  Two years later, he moved to the San Joaquin Valley of California and founded Grouleff Aviation.  Al was an early pioneer of night spraying operations.  In the early 1970’s, his flying transitioned from Stearman aircraft to the Air Tractor for which he became an Air Tractor dealer in 1985.  Grouleff Aviation carries on today with Al’s sons, Don and Greg along with grandson, Greg Jr.

At the time of his passing, Al was 95 years old.  He went to work every day until about a week before he passed away.  Al was and inspiration and a role model for us “younger” Ag. pilots and a truly wonderful gentleman.  He loved airplanes and he loved to fly them; working Ag. aircraft in his eighties, flying Stearman aerobatic routines in late eighties, and flying his Meyers 200 in his early nineties. All of this while being just about the nicest man you would ever have the pleasure of meeting!